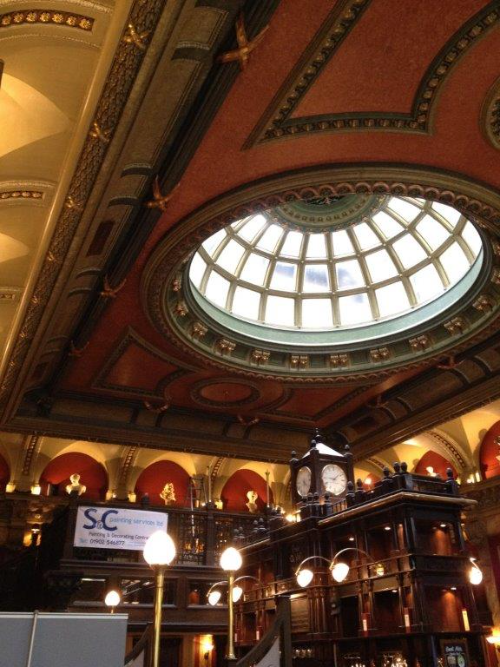 A painting and decorating company from Dudley has been presented with an industry accolade after renovating an iconic Birmingham pub.

As the UK’s largest trade body for painters and decorators, the annual awards luncheon, held at Plaisterers’ Hall in London, recognises the quality and standards of work achieved by members from across the country.

S&C Painting Services received the accolade after completing a restoration of the Old Joint Stock Pub and Theatre ceiling while city-centre revellers ate and drank below.

Managing Director, Steve Bennett, said: “As a small contractor it is a huge boost to see the pride we take in doing the job to the very highest standard and all our hard work recognised by the PDA.

“I would like to thank the Association and the judges for presenting us with the award which is a credit to the whole team.

“The Old Joint Stock pub ceiling was in need of careful restoration as the traditional oil-based eggshells and ‘glaze and wipe’ scumble finishes were starting to fail in several areas.

“It took two weeks for us to prepare the ceiling before we could start applying any paint and we had to be very careful throughout the project as the pub remained open while we were working.

“We matched the colours to the original scheme prior to starting work and re-gilded some areas before adding a final protective glaze.”

Winning a PDA Trophy Award is an exceptional achievement and a highly sought after prize among the Association’s members.

Chief Executive of the PDA, Neil Ogilvie, said: “This year has seen a record number of entries into the Premier Trophy Awards, so for S&C Painting Services to have been selected as a winner is a real reflection of the team’s talent, skill and professionalism.

“It is an incredible achievement and is well deserved.”